Last week’s announcement of Quarkus sparked a great amount of interest in the Java community: crafted from the best of breed Java libraries and standards, it allows to build Kubernetes-native applications based on GraalVM & OpenJDK HotSpot. In this blog post we are going to demonstrate how a Quarkus-based microservice can consume Debezium’s data change events via Apache Kafka. For that purpose, we’ll see what it takes to convert the shipment microservice from our recent post about the outbox pattern into Quarkus-based service.

Quarkus is a Java stack designed for the development of cloud-native applications based on the Java platform. It combines and tightly integrates mature libraries such Hibernate ORM, Vert.x, Netty, RESTEasy and Apache Camel as well as the APIs from the Eclipse MicroProfile initiative, such as Config or Reactive Messaging. Using Quarkus, you can develop applications using both imperative and reactive styles, also combining both approaches as needed.

It is designed for significantly reduced memory consumption and improved startup time. Last but not least, Quarkus supports both OpenJDK HotSpot and GraalVM virtual machines. With GraalVM it is possible to compile the application into a native binary and thus reduce the resource consumption and startup time even more.

To learn more about Quarkus itself, we recommend to take a look at its excellent Getting Started guide.

In the original example application demonstrating the outbox pattern, there was a microservice ("shipment") based on Thorntail that consumed the events produced by the Debezium connector. We’ve extended the example with a new service named "shipment-service-quarkus". It provides the same functionality as the "shipment-service" but is implemented as a microservice based on Quarkus instead of Thorntail. 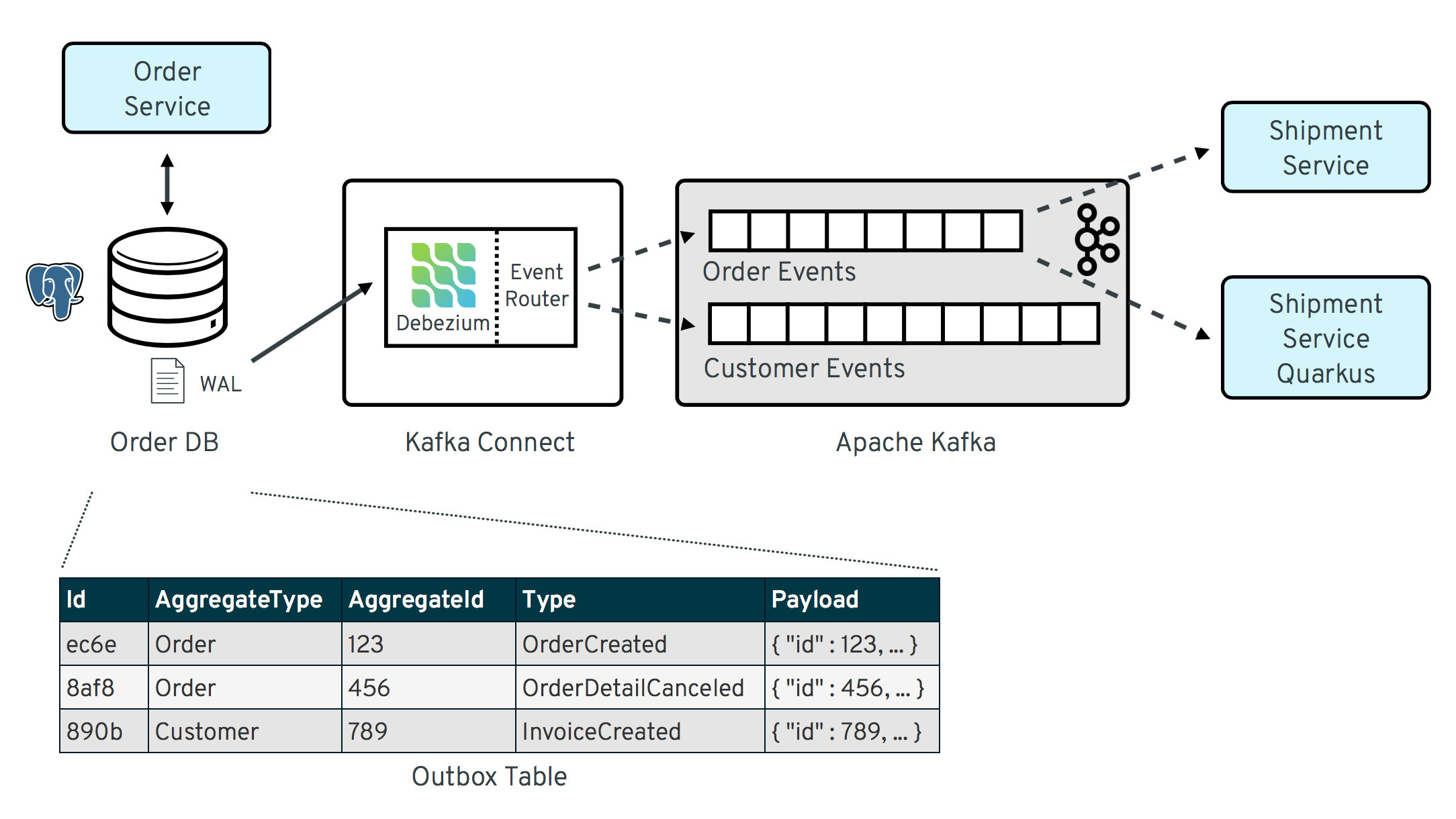 To retrofit the original service into a Quarkus-based application, only a few changes were needed:

While the first two steps are mere technicalities, the Reactive Messaging API is a nice simplification over the polling loop in the original consumer. All that’s needed to consume messages from a Kafka topic is to annotate a method with @Incoming, and it will automatically be invoked when a new message arrives:

The "orders" message source is configured via the MicroProfile Config API, which resolves it to the "OrderEvents" topic already known from the original outbox example.

The build process is mostly the same as it was before. Instead of using the Thorntail Maven plug-in, the Quarkus Maven plug-in is used now.

The following Quarkus extensions are used:

They pull in some other extensions too, e.g. quarkus-arc (the Quarkus CDI runtime) and quarkus-vertx (used by the reactive messaging support).

All the heavy-lifting is done by the Quarkus Maven plug-in which is configured in pom.xml like so:

As any Quarkus application, the shipment service is configured via the application.properties file:

In our case it contains

The Docker Compose config file has been enriched with two services, MariaDB and the new Quarkus-based shipment service. So when docker-compose up is executed, two shipment services are started side-by-side: the original Thorntail-based one and the new one using Quarkus. When the order services receives a new purchase order and exports a corresponding event to Apache Kafka via the outbox table, that message is processed by both shipment services, as they are using distinct consumer group ids.

The numbers are definitely not scientific, but provide a good indication of the order-of-magnitude difference between the native Quarkus-based application and the Thorntail service running on the JVM:

The memory data were obtained via htop utility. The startup time was measured till the message about application readiness was printed. As with all performance measurements, you should run your own comparisons based on your set-up and workload to gain insight into the actual differences for your specific use cases.

In this post we have successfully demonstrated that it is possible to consume Debezium-generated events in a Java application written with the Quarkus Java stack. We have also shown that it is possible to provide such application as a binary image and provided back-of-the-envelope performance numbers demonstrating significant savings in resources.

If you’d like to see the awesomeness of deploying Java microservices as native images by yourself, you can find the complete source code of the implementation in the Debezium examples repo. If you got any questions or feedback, please let us know in the comments below; looking forward to hearing from you!

Many thanks to Guillaume Smet for reviewing an earlier version of this post!

Jiri is a software developer (and a former quality engineer) at Red Hat. He spent most of his career with Java and system integration projects and tasks. He lives near Brno, Czech Republic.