This post originally appeared on the Bolt Labs Engineering blog.

Traditionally, MySQL has been used to power most of the backend services at Bolt. We’ve designed our schemas in a way that they’re sharded into different MySQL clusters. Each MySQL cluster contains a subset of data and consists of one primary and multiple replication nodes.

Once data is persisted to the database, we use the Debezium MySQL Connector to capture data change events and send them to Kafka. This gives us an easy and reliable way to communicate changes between back-end microservices.

Bolt has grown considerably over the past few years, and so did the volume of data written to MySQL. Manual database sharding has become quite an expensive and long-lasting process prone to errors. So we started to evaluate more scalable databases, one of which is Vitess. Vitess is an open-source database clustering system that is based on MySQL and provides horizontal scalability for it. Originated and battle-tested at YouTube, it was later open-sourced and is used by companies like Slack, Github, JD.com to power their backend storage. It combines important MySQL features with the scalability of a NoSQL database.

One of the most important features that Vitess provides is its built-in sharding. It allows the database to grow horizontally by adding new shards in a way that is transparent to back-end application logic. To your application, Vitess appears like a giant single database, but in fact data is partitioned into multiple physical shards behind the scenes. For any table, an arbitrary column can be chosen as the sharding key, and all inserts and updates will be seamlessly directed to a proper shard by Vitess itself.

Figure 1 below illustrates how back-end services interact with Vitess. At a high level, services connect to the stateless VTGate instances through a load balancer. Each VTGate has the Vitess cluster’s topology cached in its memory and redirects queries to the correct shards and the correct VTTablet (and its underlying MySQL instance) within the shards. More on VTTablet is written below.

Other useful features provided by Vitess are:

The ability to capture data changes and publish them to Apache Kafka was one of the requirements for adopting Vitess at Bolt. There were several different options we’ve considered.

Applications connect to Vitess VTGate to send queries. VTGate supports the MySQL protocol and has a SQL parser. You can use any MySQL client (e.g. JDBC) to connect to VTGate, which redirects your query to the correct shard and returns the result to your client.

However, VTGate is not equal to a MySQL instance, it is rather a stateless proxy to various MySQL instances. For the MySQL connector to receive change events, the Debezium MySQL connector needs to connect to a real MySQL instance. To make it more obvious, VTGate also has some known compatibility issues, which makes connecting to VTGate different from MySQL.

Another option is to use the Debezium MySQL Connector to connect directly to the underlying MySQL instances of different shards. It has its advantages and disadvantages.

One advantage is that for an unsharded keyspace (Vitess’s terminology for a database), the MySQL Connector can continue to work correctly and we don’t need to include additional logic or specific implementation. It should just work fine.

One of the biggest disadvantages is that resharding operations would become more complex. For example, the GTID of the original MySQL instance would change when resharded, and the MySQL connector depends on the GTID to work correctly. We also believe that having the MySQL connector connected directly to each underlying MySQL instance defies the purpose of Vitess’s operational simplicity as a new connector has to be added (or removed) each time resharding is done. Not to mention that such operation would lead to data duplication inside Kafka brokers.

We’ve also considered using the JDBC Source Connector. It allows sourcing data from any relational databases that support the JDBC driver into Kafka. Therefore, it is compatible with Vitess VTGate. It has its advantages and disadvantages as well.

VTGate exposes a gRPC service called VStream. It is a server-side streaming service. Any gRPC client can subscribe to the VStream service to get a continuous stream of change events from the underlying MySQL instances. The change events that VStream emits have similar information to the MySQL binary logs of the underlying MySQL instances. A single VStream can even subscribe to multiple shards for a given keyspace, making it quite a convenient API to build CDC tools.

When subscribing to the VStream service, the client can specify a VGTID and Tablet Type (e.g. MASTER, REPLICA). The VGTID tells the position from which VStream starts to send change events. Essentially, VGTID includes a list of (keyspace, shard, shard GTID) tuples. The Tablet Type tells which MySQL instance (primary or replica) in each shard do we read change events from. 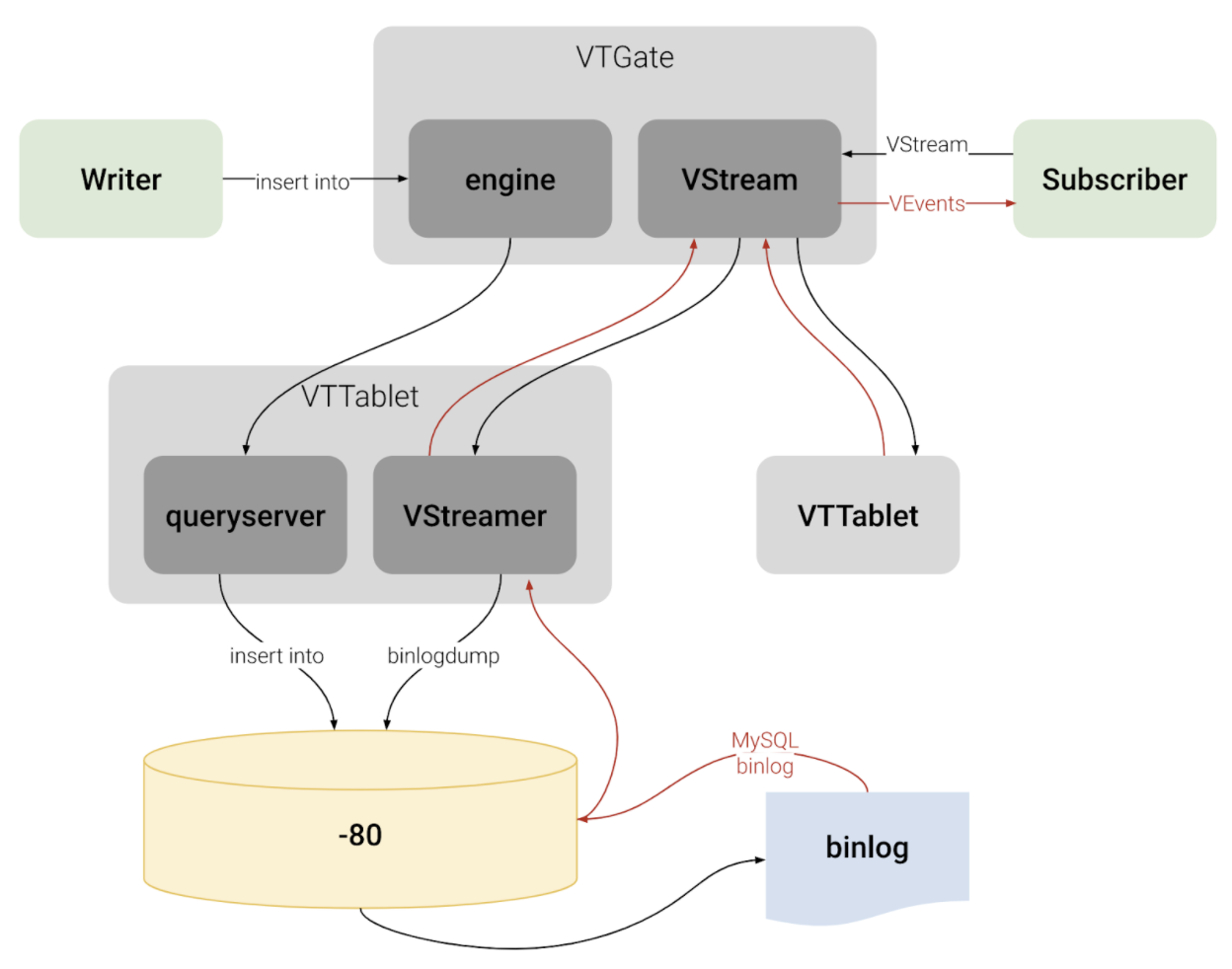 Some advantages of using VStream gRPC are:

There are also some disadvantages:

All things considered, we’ve decided to use VStream gRPC to capture change events from Vitess and implement our Vitess Connector based on all the best practices of Debezium.

After we’ve decided to implement our Vitess Connector, we started looking into the implementation details of various Debezium source connectors (MySQL, Postgres, SQLServer), to borrow some ideas. Almost all of them are implemented using a common Connector development framework. So it was clear we should develop the Vitess connector on top of it. Given we are very active users of the MySql Connector and we benefit from it being open-sourced, as it allows us to contribute to it things we were missing ourselves. So we decided we want to give back to community and open-source the Vitess source connector code-base under the Debezium umbrella. Please feel free to learn more at Debezium Connector Vitess. We welcome and value any contributions.

At a high level, as you can see below, connector instances are created in Kafka Connect workers. At the time of writing, you have two options to configure the connector to read from Vitess:

Figure 3. Each connector subscribes to all shards of a specific keyspace

Figure 4. Each connector subscribes to one shard of a specific keyspace

Internally, each connector task uses a gRPC thread to constantly receive change events from VStream and puts the events into an internal blocking queue. The connector task thread polls events out of the queue and sends them to Kafka, as can be seen in Figure 5. 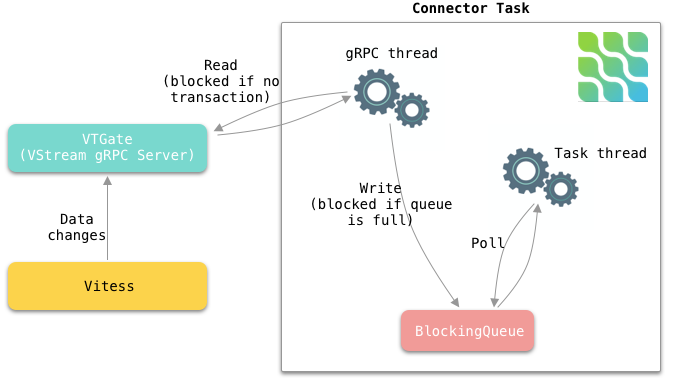 While we were implementing the Vitess Connector and digging deeper into Vitess, we’ve also realized a few challenges.

The Vitess connector supports the Vitess Reshard operation when the connector is configured to subscribe to all shards of a given keyspace. VStream sends a VGTID that contains the shard GTID for all shards. Vitess Resharding is transparent to users. Once it’s completed, Vitess will send the VGTID of the new shards. Therefore, the connector will use the new VGTID after reshard. However, you need to make sure that the connector is up and running when the reshard operation takes place. Especially please check that the offset topic of the connector has the new VGTID before deleting the old shards. This is because in case the old shards are deleted, VStream will not be able to recognize the VGTID from the old shards.

VStream includes a VGTID event in its response. We save the VGTID as the offset in the Kafka offset topic, so when the connector restarts, we can start from the saved VGTID. However, in rare cases when a transaction includes a huge amount of rows, VStream batches the change events into multiple responses, and only the last response has the VGTID. In such cases, we don’t have the VGTID for every change event we receive. We have a few options to solve this particular issue:

VStream’s response also includes a FIELD event. It’s a special event that contains the schemas of the tables of which the rows are affected. For example, let’s assume we have 2 tables, A and B. If we insert a few rows into table A, the FIELD event will only contain table A’s schema. The VStream is smart enough to only include the FIELD event whenever necessary. For example, when a VStream client reconnects, or when a table’s schema is changed.

The older version of VStream includes only the column type (e.g. Integer, Varchar), no additional information such as whether the column is the primary key, whether the column has a default value, Decimal type’s scale and precision, Enum type’s allowed values, etc.

The newer version (Vitess 8) of VStream starts to include more information on each column. This will help the connector to deserialize more accurately certain types and have a more precise schema in the change events sent to Kafka.

MySQL has been used to power most of our backend services at Bolt. Due to the considerable growth of the volume of data and operational complexity, Bolt started to evaluate Vitess for its scalability and its built-in features such as resharding.

To capture data changes from Vitess, as what we’ve been doing with Debezium MySQL Connector, we’ve considered a few options. In the end, we have implemented our own Vitess Connector based on the common Debezium connector framework. While implementing the Vitess connector, we’ve encountered a few challenges. For example, support for the Vitess reshard operation, offset management, and schema management. We reasoned about ways to address the challenges and what we worked out as solutions.

We’ve also received quite some interest from multiple communities in this project and we’ve decided to open-source Vitess Connector under the Debezium umbrella. Please feel free to learn more, and we welcome and value any contributions. 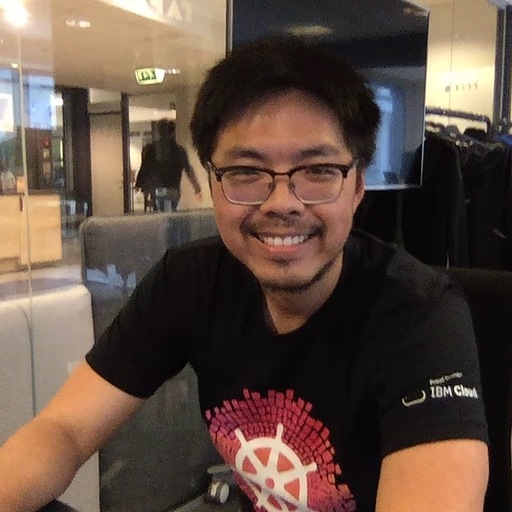 Ruslan is a Streaming Platform lead at Bolt. He likes building distributed systems and prefers real-time data to batch processing. 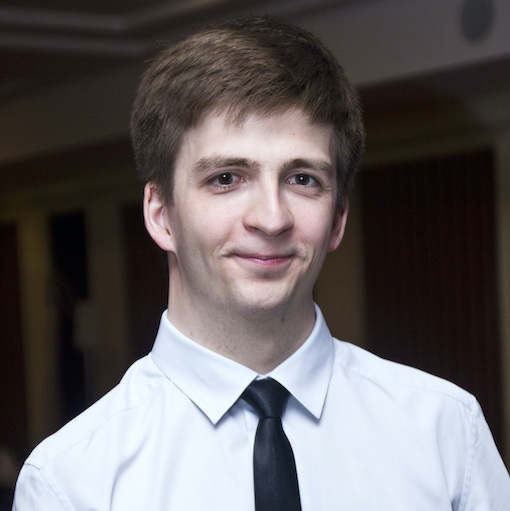