I am very happy to share the news that Debezium 1.9.0.Final has been released!

Exactly 276 issues have been fixed by the community for the 1.9 release; a big thank you to each and everyone who helped to make this happen!

Added right in time for the candidate release of Debezium 1.9, support for Cassandra 4 has been added to the Debezium Cassandra connector. Or, more specifically, a new connector has been added. I.e. you should now either download the debezium-connector-cassandra-3 or the debezium-connector-cassandra-4 connector archive, depending on your database version. While we usually strive for multi-version support within indvidual connectors, the code changes required to support the new version were that substantial, that we decided to have two separate code bases for the two connector versions (with commonalities extracted into a shared module).

Both connectors, for Cassandra 3 and 4, remain in incubating state for the time being and you can expect further improvements to them within the near feature. A massive thank you to Štefan Miklošovič and Ahmed Eljami for this huge piece of work, which also paves the road towards moving to Java 11 as the baseline for Debezium in the near future.

SQL Server allows for setting up multiple logical databases on one physical host, which for instance comes in handy for separating the data of different tenants of a multi-tenant capable application. Historically, this required to set up one instance of the Debezium connector for SQL Server per logical database, which could become a bit cumbersome when dealing with tens or even hundreds of databases, as often the case for multi-tenancy use cases.

Over the last year, Sergei Morozov and his team at SugarCRM reworked the Debezium SQL Server connector and the Debezium connector framework to be multi-partition aware for address sitations like this: the framework is now capable of streaming changes from multiple source partitions, which are split up between connector tasks (in Kafka Connect terminology), which in turn can be distributed amongst the worker nodes of a Kafka Connect cluster.

In case of the SQL Server connector, a logical database equates to one such source partition, so that you now can stream for instance 20 databases from one physical SQL Server host, spread across four source tasks running on five Kafka Connect worker nodes. To use the new multi-partition mode, configure the names of the databases to capture via the new database.names connector configuration property (rather than using the previously existing database.dbname), and optionally set the value of tasks.max to a value larger than 1. Note that the schema and topic names as well as the structure of connector metrics differs between single and multi-partition mode, so as to account for the name of the logical database and the id of the source task, respectively. 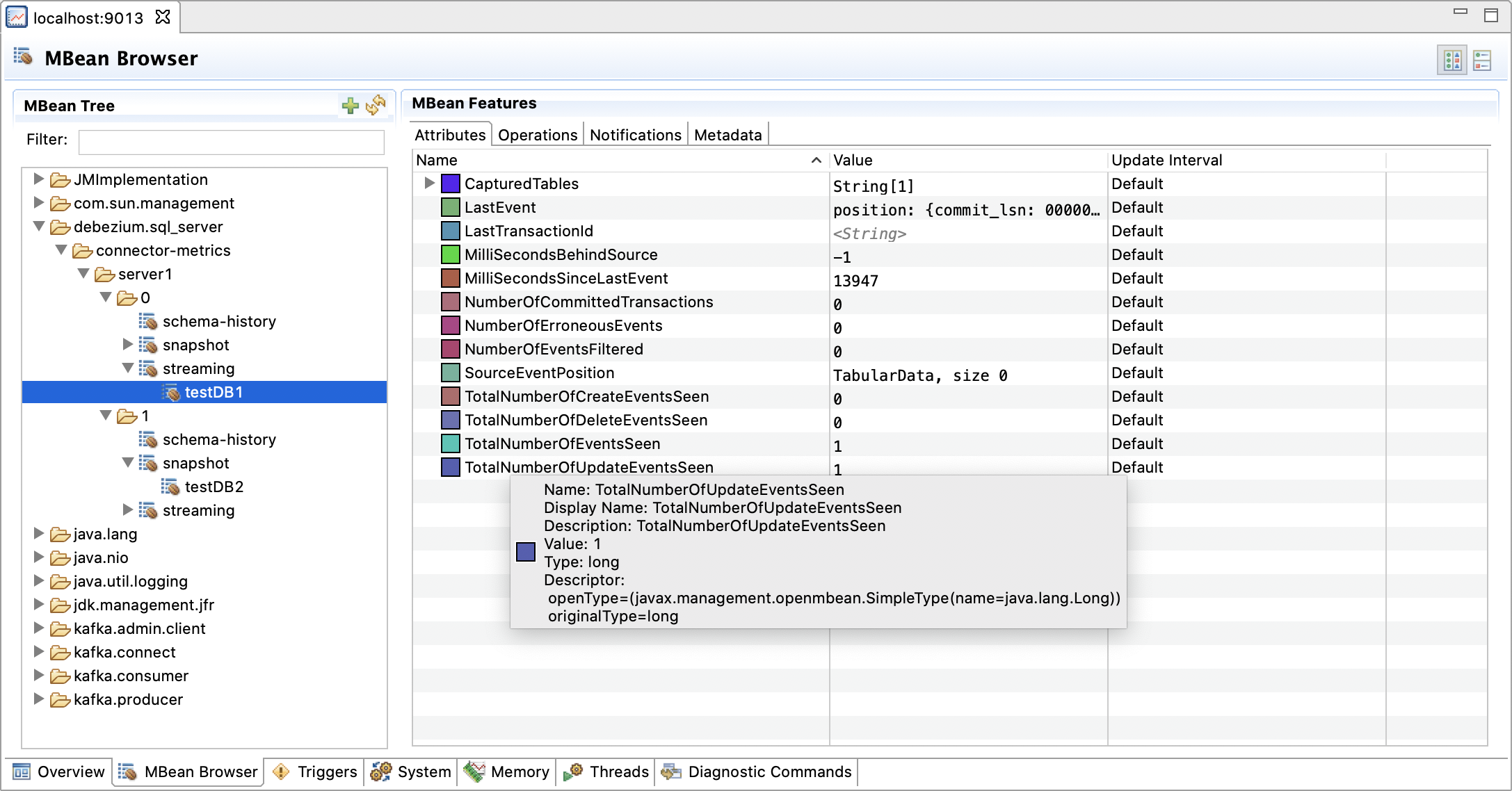 Thanks a lot to Sergei and team for their excellent collaboration around that feature!

Let’s take a look at some more features new in Debezium 1.9. First, Debezium Server now includes a sink adaptor for HTTP, which means it can be used as a "native" event source for Knative Serving, without the need for sending messages through a message broker like Apache Kafka first.

Then, the friendly folks over at Redis stepped up and contributed several improvements to how Debezium (Server) integrates with Redis Streams: besides several performance improvements, the database history for connectors like the MySQL one can now be stored in Redis, also offsets can be stored there now. But they didn’t stop there: for instance, Debezium Server now supports custom configuration providers, as already provided in Kafka Connect.

Going forward, the Redis team is planning to work on further cool improvements to Debezium at large, such as better retrying logic in case of failures. Looking forward to those!

To learn more about all the features, improvements and bug fixes shipped in Debezium 1.9, please check out the original release announcements (Alpha1, Alpha2, Beta1, and CR1) as well as the 1.9 release notes!

Many thanks to all the folks from the Debezium community which contributed code changes to this release:

So what’s next after 1.9? You may think 1.10, but that’s not what we’ll do; instead, we’re planning to release Debezium 2.0 as a new major version later this year!

While we don’t strictly adhere to semantic versioning (i.e. a new minor release like 1.9 may require some small degree of consideration), one of our key objectives with Debezium releases is to limit breaking changes for existing users as much as possible. That’s why for instance configuration options that became superfluous are not just removed but deprecated. The same applies for changes to the change event format, which are rolled out gradually. Over time, this has led to a number of legacy options and other aspects which we finally want to iron out. Debezium 2.0 will be the release where we will get rid of this kind of legacy cruft. For instance, we are planning to

Planning for this is in full swing right now, and you are very much invited to join the discussion either on the mailing list or on the DBZ-3899 issue in Jira. Note that while we want to take the opportunity to clean up some odditities which have accumulated over time, backwards compatibility will be key concern as always, and we’ll try to minimize the impact on existing users. But as you would expect it from a new major release, upgrading may take a slightly larger effort in comparison to the usual minor releases.

In terms of a timeline, due to the size and number of planned changes, we’re going to deviate from the usual quarterly release cadence and instead reserve two quarters for working on Debezium 2.0, i.e. you can look forward to that release at the end of September. In the meantime, there will be bugfix releases of the 1.9 version, as needed per incoming bug reports.

Gunnar is a software engineer at Decodable and an open-source enthusiast by heart. He has been the project lead of Debezium over many years. Gunnar has created open-source projects like kcctl, JfrUnit, and MapStruct, and is the spec lead for Bean Validation 2.0 (JSR 380). He’s based in Hamburg, Germany.